Given the forecast for a light intermittent easterly breeze a turnout of 20 dinghies for Rollesby Broad’s annual New Year’s Open was more than expected gave close competition throughout the fleet.

At the race briefing OOD Jon Sallis wisely raised the postponement and sent competitors to the galley for coffee whilst waiting for any sign of the forecast breeze to arrive. After a 30 minute delay a short course with an awkward short first leg was set. After a general recall the fleet was led around the course by Chris Sallis in his D-One, with the visiting Richard Fryer in close pursuit in his RS300. However it was the slower singlehanders who were to enjoy the close racing most. Ian Ayres in his Solo was in contact early on but it was Veronica Falat in her Streaker who negotiated the ‘fast boat’ traffic best on the first run to lead this section of the fleet to the finish with Kevin Postlethwaite rounding out the top three in another Solo.

Race 2 saw slightly more wind and a clean start, with Fryer this time joined by Phil Highfield in his RS700 at the front of the fleet. Ayres and Falat were very close behind at the second mark and in this race it was Falat’s turn to fall back into the traffic whilst Ayres and Stuart Highfield (Laser) sailed sufficiently clear for the Laser to complete the podium places.

With a win and a second apiece it was down to Ayres and Falat to race for overall top place after lunch; however with a significant course change Fryer was determined to improve on his morning’s results and led away to win on handicap. Falat led Ayres early on before they swapped place on the second beat. Overlapped the pair approached the last windward mark of lap two, Ayres clipped the flag pole on the mark and the race appeared won by Falat. Conditions were such that a never give up policy was essential and a lap later the pair arrived at the last mark with Falat less than a boat length in front. As they crossed the line both thought the other had won as the gap was too close to call. In the end just two seconds on handicap gave Falat the place and the meeting. 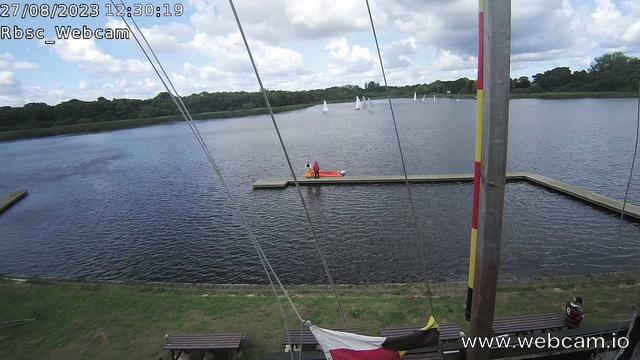