The air temperature had certainly seen the day’s title as ice was cracked off of covers and decks for Rollesby’s Frostbite Regatta on Sunday 3rd February; fortunately the sun was out and the wind relatively light so everyone felt much warmer than the 4 degrees air temperature. Unusually, only 2 Wayfarers joined the 18 mixed single-handers; so it was decided to run the racing as all in, rather than in separate fleets.

Phil Highfield (Streaker) and Ian Ayres (Solo) took the furthest left and right hand routes up the initial beat before rounding the first mark overlapped, with Mike McNamara (Harrier) in closest pursuit. McNamara rolled over the two slower boats on the first reach and rapidly built a lead. Dave Houghton & Jon Symonds (Wayfarer) recovered well from having been a long way over at the start! dragging David Frary in his Finn up to the top group with them. On the last lap some large gaps opened with McNamara taking a 15 second handicap win from Ayres; compared to the 3 minute gap back Highfield and Frary who almost dead-heated in third and fourth.

A change of wind direction and course saw Steve Leigh (Solo) with an almost perfect start; however he and Ayres were quickly sandwiched by the faster travelling McNamara and Frary and by the time they could take remedial action were back in the pack led by Daniel Bull and James Letts in their Lasers. Highfield had taken full advantage of the bunching behind to sail along the bank and lead round the first two marks. The wind increased as the race progressed benefitting the faster craft most and McNamara took another narrow win, this time with Frary second and Houghton third.

A slightly reduced but still substantial fleet of 13 took to the water after lunch; McNamara and Highfield were best away with Houghton close behind, however the wind had swung a little further and Ayres and the second Wayfarer of John Saddington & Dennis Manning were the first to spot this, closing in at the first windward mark, this pack all finished within 25 seconds on handicap! McNamara rightly led on the water, but a better spinnaker course gave the win to Houghton. Highfield and Ayres had a bit of an epic cat and mouse race with Ayres close enough behind on the water to just take second place on handicap and for the day overall. 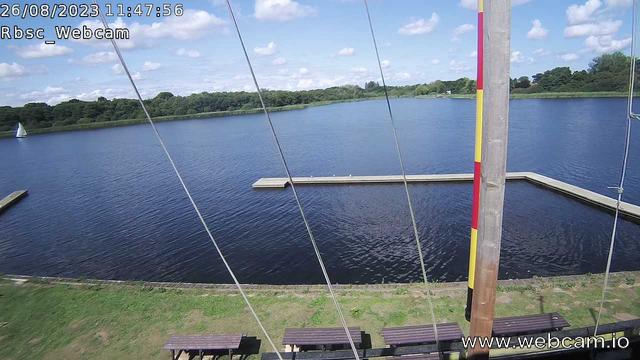