It was a day for bending burgees and washing sails with probably more sailors getting a close up of their centreboard than those that didn’t at Rollesby on Sun 8th Dec.

Just four multi-sailed boats took to the water. Dave Hougton & John Symonds, revelling that there was a long run, flew their Wayfarers kite to good effect leaving their competitors long in their wake. Howard Astley-Jones having made a cautious start to his first race at the club soon got his Vareo up to speed to take second. Mike McNamara & Andy Smith joined the fleet for race 2 but conditions were a bit lively for Albacore sailing and they had to settle for second on handicap behind Houghton.

In the single-handers anyone who could stay upright looked likely to do very well, though it didn’t guarantee success if you weren’t going fast, and despite a fair few swims there were ten finishers! Roger Wilson (Solo) & Tamsin Highfield (Streaker) made the best starts, with Stuart Highfield (Laser) and Ian Ayres (Solo) completing a tight top 4 at the windward end of the broad. Stuart was the first casualty at the front of the fleet and with Tamsin finding the shifting winds under the trees not doing her any favours it looked like Wilson and Ayres would be battling it out. On the penultimate beat Ayres capsized and whilst waiting for the wind to ease slightly Tamsin slipped by. As these two flew down the last run Wilson managed to throw away a commanding lead with a double roll less than 100 yds from the line; Tamsin won on the water but Ayres took the race on handicap.

A couple of competitors were led slightly astray by Oscar Norris (Radial) as they mis-judged (or possibly forgot about) the new windward mark for race 2. Stuart led round but was immediately in trouble and Ayres and Wilson had to take dramatic avoiding action to avoid a synchronised triple ducking! This allowed Phil Highfield now taking over Streaker duties and Steve Whitby (Europe) to join the Solos in a front group. Ayres decided one lap was enough and Wilson rolled in on the next beat to allow Phil, who looked very much under control, to establish a lead he would hold until the finish. Wilson was second and Whitby held off a late challenge by Matt Boreham (Solo) to take third by 4 seconds.

Needless to say there were no takers for a third race after a warming club lunch ! 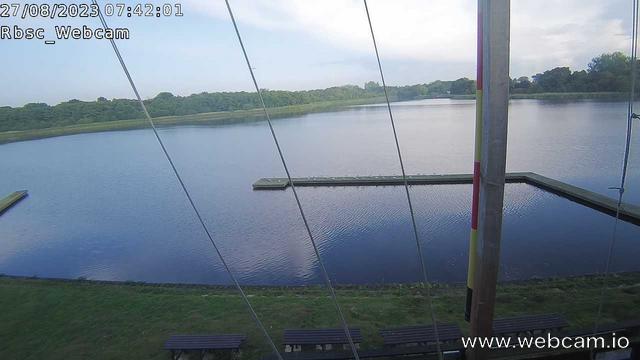