Those who looked out at the flat water before the start of raceone and opted not to rig probably thought themselves wise until they missed out on an exciting ride through a squally race two and a pleasant race three at Rollesby for the completion of the Autumn series.

Mike McNamara must have taken note of some of his own instructing (elsewhere in the Broads) as he produced two good starts in his Harrier to lead round the course in both the mornings’ single hander races. Given the very lightwinds for race one he was probably surprised to win on handicap; with John Saddington (Solo) and Tamsin Highfield (Streaker) leading home the main pack in second and third. Second place gave Saddington the series without having won a race.

The sky darkened and the breeze kicked in for race two and there were several calls for water at the three downwind marks as the pack compressed and stretched out behind McNamara whilst the gusts came and went. Steve Whitby brought his MiniSail home in mid-fleet to take second on handicap and the series; he didn’t win a race either!; with Phil Highfield third in the family Streaker.

In the Multisails Dave Houghton & John Symonds (Wayfarer) had already won both series but were pushed harder than usual by Ian & Sharon Ayres in their Leader. These two finished nearly half a lap clear in race one after escaping the rest early on the downwind part of the course. As the wind picked up for race two Richard Foster & Tony Ingram brought their Xenon to the front and as these three boats arrived overlapped and planing with kites up at the first gybe of race two there was a moment of ‘it’s not like Rollesby’ panic before a successful synchronised rounding! Houghton & Symonds eventually stole just enough distance to win by a few seconds from the Ayres’.

McNamara continued his good form after lunch to win from Ayres (now in Solo mode) and Saddington and take the afternoon series. 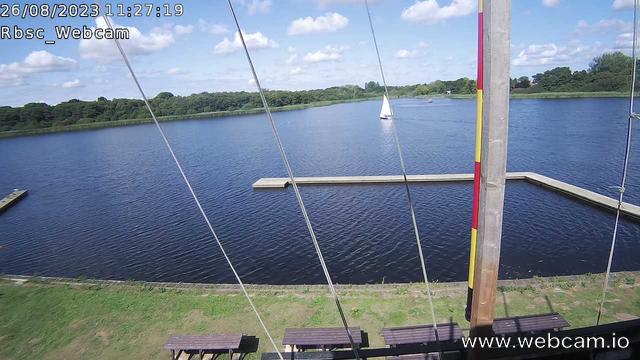