It was definitely a game of two halves; to mix sporting metaphors; at Rollesby Broad this Sunday (3rd March). Race officer Matt Boreham chose to set 4 gybes on a downwind slalom as opposed to the three previous weeks of long runs.

Race one was bit of a damp squib (literally) as the gentle force 2 the race started in came down the broad in varying puffs accompanied by occasional drizzle. Dave Houghton & John Symonds won the Wayfarer race by a margin from Bob Sparrow & Steve Gibbons who only just pipped John Saddington & Dennis Manning for second. In the single-handers David Frary in his Finn, slowly pulled away from the fleet of 14 led by the Solos of Robert Hawkins and Ian Ayres to take the win.

As the noon start time for the second race approached the postponement flag was raised and hung limply from its hoist as the sailors wandered around ashore quaffing coffee and pondering whether or not to give-up and go home! At 12.15 a few ripples appeared on the water, the flag was lowered and launching commenced. The first capsize (Keith Sykes in his Laser) was less than 5 minutes away as the anticipated storm Freya arrived with aplomb.

Only three Wayfarers started; Houghton wobbled down the first short run with Saddington in pursuit; Sparrow already on third, decided to wear round at the first gybe, only to end up in the reeds. Houghton took a somewhat cautious approach from there on but was able to hold on for a narrow win from Saddington.

Meanwhile the single-handers were either relishing the breeze or stretching the rescue services. More than one sailor was seen to head ashore even before the start. Ayres went for the port start in a cloud of spray, he had to duck a couple of transoms, but only the Laser of Daniel Bull went with him to the right. Thomas suffered the indignity of his mast coming down recovering from a capsize after only 100yds. Bull led round the windward mark, but then put in a double capsize at the first gybe mark. Phil Highfield took the lead in his Streaker only to lose his mainsheet at the last (fourth) gybe of the lap; yes they were all still in the course. Ayres took the lead as a charging James Letts (Laser) flew into second before a wipeout broach at the leeward mark. The next beat proved less eventful but as the fleet turned downwind on lap two the wind was rising; Ayres capsized briefly at the first gybe this time, giving the lead back to Bull and Phil with Stuart Highfield bringing his Laser into contention. By lap 3 the hardy few left racing hard were starting to manage the conditions; but they were still glad to hear the shorten course signal! Bull led Phil across the line but not by far enough; Ayres was third with Stuart fourth on the water, but with Hawkins – the first finisher to stay upright close enough to take him on handicap. 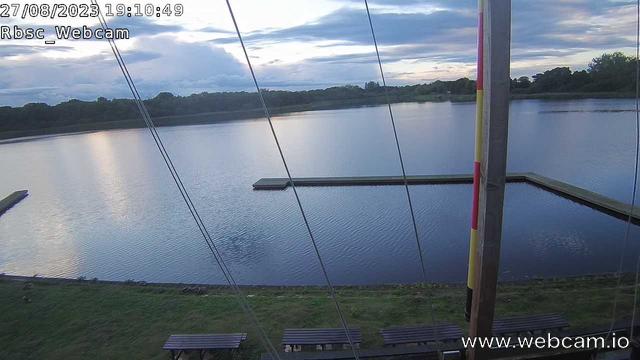