The Spring series at Rollesby started with the first “Eels Foot Race” of the year. Fourteen boat set out but, as the wind died after the start, the short beat across the Broad turned into a torturous affair. Mike McNamara in his Harrier with Ian and Sharon Ayres in their Leader came round the windward mark ahead of the rest. After a slow broad reach down the Broad the wind picked up and once through the cut, the fleet had a good sail in the bigger Broad. McNamara lead the fleet home. The Leader and the Hansons in their Wayfarer were not far behind having made good use of spinnakers. Handicap results gave the Ayres a win with McNamara second and Val and Chris Hanson third.
The second race with a figure of eight course saw a clear win for McNamara with Ian Hanson in a solo second and the Leader third.

Three Lasers and a Wayfarer stayed for the afternoon race. Keith Sykes
Laser took the win two second infront of Bob Sparrow and Steve in the Wayfarer.

To kick off the season, and at the request of several Wednesday Sailors, Mike McNamara has agreed to give a talk on the racing rules on the previous Wednesday evening i.e. 17thApril.

We would intend this kick off at 7 and Mike has promised to aim it at those who have done a little racing but would benefit from knowing more than just the port / starboard rule! 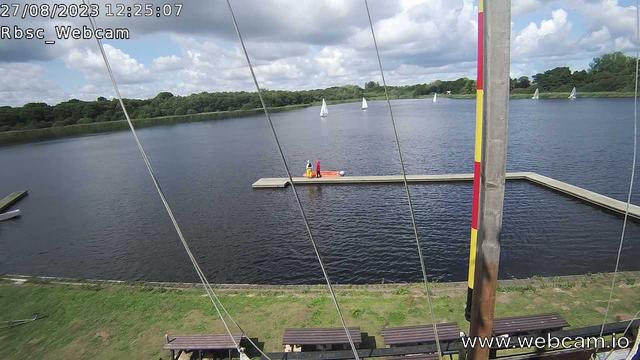