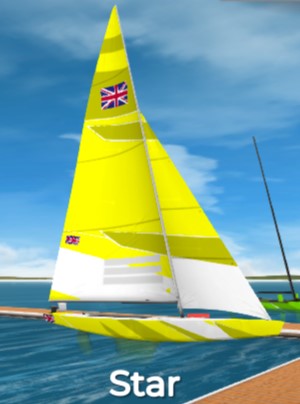 With the roll of the dice last week selecting the Star class for this weeks sailing it was a rather more sedate week for the e-sailors.

Dave was first off the start line in race one. The fleet split with Phil and Tamsin choosing the left hand side which proved to be the best route and lead rounding the windward mark. It was tight going into the final run with Dave and Phil tussling for wind leaving Tamsin to take the win and Phil second.

Phil hit the line with speed in race two to take and early lead.  After a poor start (for him!) Dan recovered well to challenge Phil on the final leg with both crossing the line with the same time but the e-judge decision gave the win to Phil.

Dave took an early lead in race three and lead until the final hundred metres when Dan covered well and snuck past.

In race four the fleet were fairly close with Dan just ahead at the windward mark but then built a good lead at the finish with Phil a comfortable second.

In the final ‘official’ race of the day Antony appeared to have fitted foils to his Star as he sped away at the start building up a good lead at the finish. Ian rounded the windward mark second and sailed well to hold on to second ahead of a charging Dan and Keith.

After two weeks Dan and Phil lead, clearly these two  have the x-factor compared with the rest of the fleet but it’s getting closer every week as the rest begin to work out the finer points of the ‘game’.

As has become the norm,  we then decided to compete in some unofficial racing in the other classes so we opted to race a few of the faster classes for some fun.

Good luck to Phil Highfield representing the club in East Region eSailing heats. These will take place at 18:30 on Monday evening (18th) and hopefully the regional finals at 18:30 on the 20th May. (I pop the details of how to watch on Whatsapp group when we have them,)