Two things happened with the fleets at Rollesby this week; that were almost as rare as the un-February like weather. Firstly the multis-sails outnumbered the single-handers an event no-one can recall in recent years, and secondly the singlehanded fleet was entirely a Solo fleet in race 2 after the single Phantom who joined them in race 1 stayed ashore, the Lasers had already decided there was insufficient wind; which may have been true at 10.30 but there was a comfortable breeze by midday!

And so whilst Gareth Thomas (Phantom) did for a while lead the single-handers round in race 1, it was winter member Terry Palmer who took the win for the Solos from John Saddington and Steve Leigh. In race 2 Kevin Postlethwaite had a good lead at the first leeward mark with the remainder of the fleet rounding four abreast. However unable to defend both sides of the beat Saddington and Palmer were both able to get close to Postlethwaite and take full advantage of a perfectly timed (for them) gust at the windward mark to catch and pass him on the run back down the broad.

In the Multisails it was spinnakers to the fore in race 1; the three boats with, coming out on top. Ian & Sharon Ayres in their Leader were able to use their greater tacking agility to keep in touch with the faster straight line speed of Dave Houghton & John Symonds and Peter and Eileen Dearnley in their Wayfarers. However as the wind slowly rotated to the east giving less options upwind, the Wayfarers took the spoils. In race 2 Val & Chris Hanson along with Pete & Rachel Smith both started at the less obvious but breezier leeward end of the line and as those at the windward end succumbed to a hole, were able to sail out underneath them and create a tight top four at the windward mark. As the wind had shifted to stop ‘goose-winging’ the spinnakers of Dearnley and Houghton paid even more and they slowly pulled away with the Smiths leading home the rest of the pack.

In the afternoon it looked like Saddington and Leigh might hold on the Wayfarers and for a lap they were certainly close enough to challenge, but once again the lopsided upwind leg saw the Houghton and Dearnley pull away to take the top two spots. 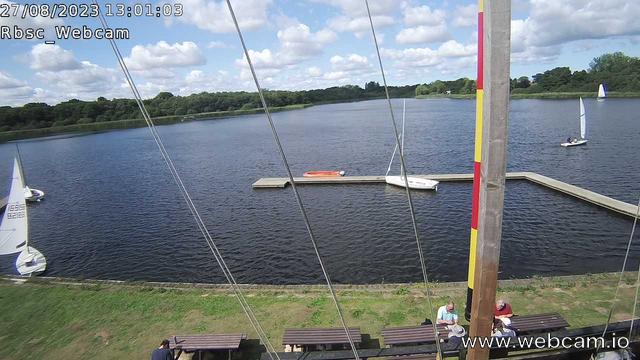